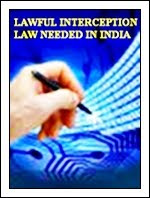 According to Praveen Dalal, a Supreme Court Lawyer and leading Techno Legal Expert of India, one of the laws that require an immediate repeal is the Indian Telegraph Act, 1885. It is the most abused law of India when it comes to Phone Tapping and Illegal Surveillance. The fact and truth is that India does not have a Legal and Constitutionally Sound Phone Tapping and E-Surveillance Law.

The present phone tapping, e-surveillance, interceptions, website blocking, Internet censorship, etc are done in an unconstitutional and undemocratic manner in India. This is despite what Indian government claims.

The matter is pending before the Supreme Court of India and it would be a good opportunity to declare the Telegraph Act unconstitutional so that the government may be forced to enact a constitutionally sound law in this regard.
Posted by Techno Legal News at 01:26