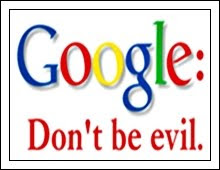 Of late, Google has been actively engaging in web results manipulations one way or other. This may be due to governmental orders or on its own. But it is happening for sure.

For some strange reasons Google is engaging in two forms of web censorship. The first one is by putting relevant and critical posts in blackholes. The second method is by actively manipulating the Google news and search results.

Google has been in controversies from time to time. Whether it is illegal data gathering, censorship of Google news searches, manipulation of search results, etc, Google has been doing it all. In fact, it seems Google is actively helping Indian government and its agencies for messing up with Aadhar project, UIDAI, World Bank or any other similar post that questions the wrong practices of Indian government.

What is more astonishing is that India does not have a “Constitutionally Sound Law” for Lawful Interceptions, E-Surveillance, Websites Blocking, Internet Censorship, etc says Praveen Dalal, managing partner of New Delhi based ICT law firm Perry4Law and leading techno legal expert of India. Praveen Dalal has spearheaded the exclusive centre for protection of human rights in cyberspace that keeps a close watch upon civil liberty issues of cyberspace.

However, nothing can match the evil practice of websites and Internet censorship in India done by Indian government, its agencies and commercial companies operating in India. For instance, Google has been censoring critical web posts regarding Aadhar project of India and unique identification authority of India (UIDAI) for the past two or more years. Further, it has also temporarily filtered some of our posts questioning the practice of World Bank to grant unaccountable loans to countries like India. Further, international loans and grants related posts questioning the role of World Bank and Indian government are also poorly placed in search results.

Our latest article has been censored by Google News twice at this and this. Of course, this is neither a co incidence nor a technical glitch that Google is currently facing. The truth is that unaccountable, illegal and unconstitutional websites blocking, Internet censorship and e-surveillance exercise along with lack of legal framework makes Aadhar project and UIDAI very dangerous project and authority. These activities censorship and e-surveillance are supported by the draconian cyber law of India. Citizens wake up before it is too late. Meanwhile here is the controversial interview that has been censored twice.