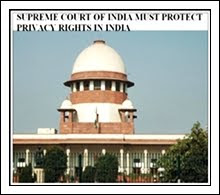 India has been passing through a phase that is most dangerous for civil liberties. Indian government and its agencies are violating various civil liberties like right to privacy, right to speech and expression, right to know, etc with no fear or remorse. The failure of Parliamentary Democracy has also contributed its share of woes for India.

To broaden its e-surveillance capabilities, Indian government has launched many unconstitutional projects without any legal framework and that are openly and actually violating various civil liberties of Indians. Some of them include Aadhar/UID project, national intelligence grid (Natgrid), crime and criminal tracking network and systems (CCTNS) project of India (CCTNS Project), central monitoring system (CMS) of India, etc.

In fact, a writ petition for protection of privacy rights in India is already pending before the Supreme Court of India. The way Indian executive is playing with the Constitution of India, the day is not far when there would be a complete “constitutional failure” in India.

Even the prime minister’s office (PMO) has failed to take any step in this direction. Presently, there is “no Parliamentary oversight” of projects like Aadhar/UID, Natgrid, CCTNS, central monitoring system (CMS), etc. If we add biometric data with other data gather by National Census and National Population Register of India and supplement it with projects like Natgrid, CCTNS, CMS, etc, an endemic e-surveillance model is apparent.

Fortunately, the Supreme Court of India has shown its displeasure regarding the growing use of technology for violating privacy rights of Indians. A division bench of Justice G.S. Singhvi and A.K. Ganguly has expressed that with the technological advancement, privacy is virtually disappearing. The bench also observed that the Official Secrets Act is a very old act it may need reform.

The Indian telegraph Act, 1885 must also be declared unconstitutional by the Supreme Court of India and a constitutionally sound phone tapping and e-surveillance law must be enacted by the Parliament of India.

Till Supreme Court of India does not declare laws like official secret, telegraph act, information technology act 2000, etc as “unconstitutional”, nothing is going to improve in India. These laws have been deliberately framed in this manner so that civil liberties can be suppressed at will. If even Supreme Court fails to deliver justice, India would become an absolute endemic e-surveillance society and a “banana republic”.
Posted by Techno Legal News at 02:25